Some of you are those people.  The ones who really want to know the answer, when you ask, How are you?  No matter how muddy, how messy, how story-filled, or how strange, the answer may be.

Thankfully for me, one of your type meets up with me for coffee each week.   We hadn’t even ordered the mochas yet, last week, but she wanted to know.

“I’m feeling uneasy,” I answered.  Then I gave a very “foreigner”-sounding reason for it: “I have many things to do today, and yet have managed to start none of them….”  Went to meet someone; forgot they are not home.  Wanted to organize my university class from my laptop, while sitting in the lobby of the community center; interrupted by local friends walking in the door.  Shifted other plans to be present at a language lesson; time got changed, last minute, by my teacher.

Unfortunately, my addiction to showing results, to doing things efficiently– in a hurry— did not get left behind on my native continent.

Wednesday, a little before class, one of my students informed me of a special prayer ceremony, which would take place in half an hour.  It was in memory of the fallen soldier.  I assured her that she and the other students would be allowed to attend; my 75 minute lesson was shortened to 15.  Then we took the last 15 minutes to talk about the pilot.  Many of the students had seen the video, which had been made public the night before, of his death.  How do you feel?

“This is not Islam,” one began.  The class nodded their assent.

“We feel sad…sad.”  “People think it will separate us but it will unite us.”  “They make our Muslim faith look horrible.”

“I have no words in the English language,” said a young woman in the front row.   Encouraged to speak Arabic, she still struggled to find vocabulary:  “It’s a crime. How… how could anyone do that?  How could they burn a person?”

Some other students studied the tiles on the floor, solemn-faced and articulately silent.  Finally one spoke up: “We feel frustrated, because there is nothing we can do.”

What do people do when they are angry?  Our response to others’ actions is a choice– so what should WE do?  I want to give them answers.  To throw them a life preserver, as they wrestle with a flood of confusion and grief… To drag them back to safety.

But I don’t have answers either.  As we left, I saw a printout of his picture, posted at the university’s entrance.  Not the military picture from the news articles; he is dressed casually, smiling, maybe on vacation.  Relaxed.  And I thought, this is over our heads, and there is no shortcut.  We are going to have to learn how to swim.

And that will take some time.

Forty-one teenaged Arab girls spent Friday exploring the most famous tourist attraction of their country: a world-renowned, historically-rich archeological city.  Many had never visited before.  Groups had prepared presentations on one of 12 specific locations, which spread out over several kilometers, up hills, and in valleys. 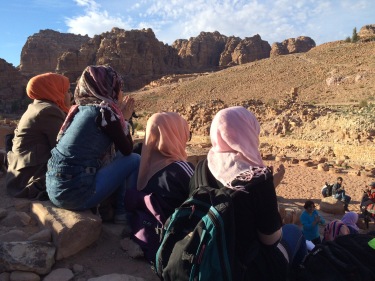 I was in charge of the day, and felt responsible to get them to as many sites as we could visit.  Maybe 10 out of 12, I thought.

We left an hour late.  I looked the list of locations.  Maybe nine out of twelve?

Lunch, which we had arranged in advance, wasn’t ready on time.  We lost another 40 minutes.   Eight?

And then there were the girls themselves.  I tried to motivate them by making it a game– “Your team gets a point if you make it to the next spot on time!”– without smothering the fun of the journey.  They were stopping to look at Bedouin shops, posing in caves and on camels.  Their songs reverberated off the rocks, as they ambled ancient paths between the mountains.

At one point, what I thought I said was meet in 15 minutes.  The whole group laughed good-naturedly.  “We’ll starve if it takes that long!”

What did I say?

Apparently, my Arabic still needs help.  “You just told us to meet in fifteen years!”

At the end of the day, I think we had hit six or seven of the sites.  But rushing toward the goal would have robbed them of the chance to fully savor it all– the journey.  The presence of their teachers and each other.  The conversations with locals.  The challenges of exertion and exploration.

Together with the ones at the university, these students will keep reminding me that learning, like healing, can’t be rushed.

When I meet my friend for coffee tomorrow, I’ll know– just a little more than I did last week– it’s not about time.